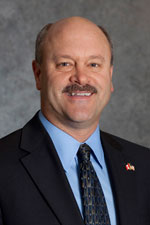 Alan Hodnik has served on the Board of Directors since March 2011 and was appointed lead independent director in June 2020. He is chair of the Compensation and Nominating and Corporate Governance committees and also serves on the Audit and Health, Safety, Environment and Communities committees.

Mr. Hodnik retired in 2021 from ALLETE Inc., as its executive chairman after a career that spanned 40 years. Minnesota Power, an ALLETE subsidiary, is the energy provider to the PolyMet project. After holding various titles of increasing responsibility over his career, he was named president of ALLETE in 2009, CEO in 2010 and chairman of the board in 2011. After announcing his plans to retire in 2020, Mr. Hodnik served ALLETE as executive chairman in a transitionary role until his retirement in May 2021.

Mr. Hodnik maintains extensive business, labor, political and community relationships across the State of Minnesota and regionally. He serves on the Essentia Health Systems Board of Director and on the Grand Rapids, Minnesota, Economic Development Authority. He served as Mayor of Aurora from 1988 to 1998. Aurora along with nearby Hoyt Lakes are co-host communities of the PolyMet Project. He resides in Minnesota.