“The first half of 2022 has been especially productive for PolyMet as we made significant progress on several fronts in advancing the NorthMet Project, culminating with the announced NewRange Copper Nickel joint venture agreement with Teck in July,” said Jon Cherry, chairman, president and CEO. “Other highlights include the ruling in January by the Minnesota Court of Appeals that affirmed nearly all aspects of our water discharge permit, the completion in early May of the US Army Corps of Engineers section 401(a)(2) hearing, and rulings on motions – all in our favor – by the administrative law judge (ALJ) in July for the Permit to Mine contested case, moving that process forward.”

PolyMet and Teck American Inc., a subsidiary of Teck Resources Limited (“Teck”) announced on July 20, 2022, the parties had entered into an agreement to form a 50:50 joint venture. The venture will place their respective NorthMet and Mesaba resources of high demand metals critical to supporting the transition to clean energy technologies under single management. PolyMet and Teck will become equal owners in NewRange Copper Nickel LLC. The agreement is anticipated to be completed by the end of Q1 2023, and is subject to receipt of customary closing conditions and certain regulatory approvals.

The company also saw progress with Permit to Mine litigation as the ALJ on July 29, 2022, denied all motions by opponents, who had attempted to further delay and expand the scope of the contested case. The ALJ is expected to set a schedule for the contested case in a prehearing conference August 24.

To date, PolyMet has received favorable decisions in all six cases that have reached final conclusion – four federal and two state. More information on recent court developments can be found on the company’s website at https://polymetmining.com/investors/news/ and on its SEDAR and EDGAR profiles.

In addition to the progress made in litigation and regulatory proceedings, the company continued its focus on optimization and engineering efforts related to the NorthMet Project, and maintained full compliance with all operating permits during the period. 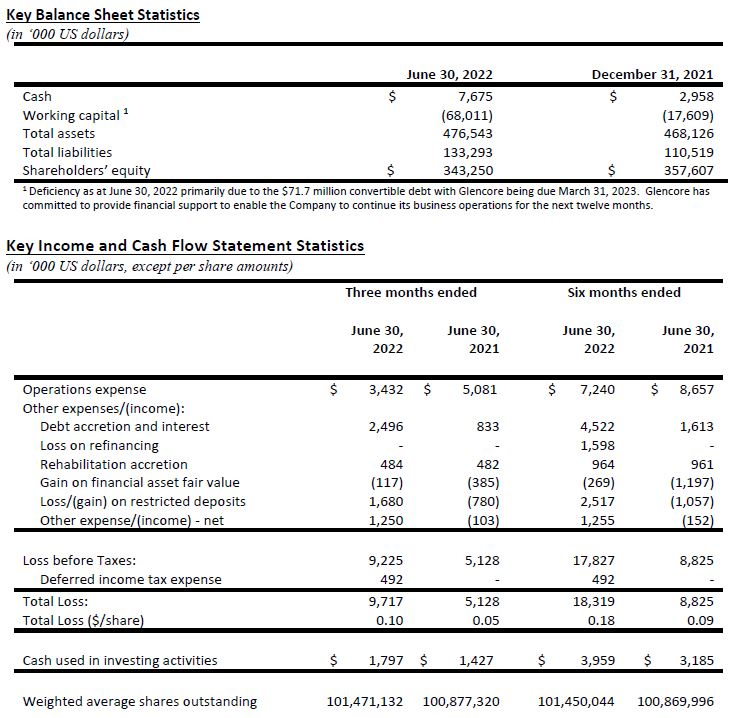 About PolyMet
PolyMet is a mine development company that owns 100% of the NorthMet Project, the first large-scale project to have received permits within the Duluth Complex in northeastern Minnesota, one of the world’s major, undeveloped mining regions. NorthMet has significant proven and probable reserves of copper, nickel and palladium – metals vital to infrastructure improvements and global carbon reduction efforts – in addition to marketable reserves of cobalt, platinum and gold. When operational, NorthMet will become one of the leading producers of nickel, palladium and cobalt in the U.S., feeding the supply chain with high-demand, responsibly mined metals crucial to the manufacture of clean energy and clean mobility technologies such as wind and solar generation, battery storage and electric vehicles.
Located in the Mesabi Iron Range, the project will provide economic diversity while leveraging the region’s established supplier network and skilled workforce and generate a level of activity that will have a significant effect in the local economy. For more information: www.polymetmining.com.
For further information, please contact:

PolyMet Disclosures
This news release contains certain forward-looking statements concerning anticipated developments in PolyMet’s operations in the future. Forward-looking statements are frequently, but not always, identified by words such as “expects,” “anticipates,” “believes,” “intends,” “estimates,” “potential,” “possible,” “projects,” “plans,” and similar expressions, or statements that events, conditions or results “will,” “may,” “could,” or “should” occur or be achieved or their negatives or other comparable words. These forward-looking statements may include statements regarding the ability to receive environmental and operating permits, job creation, and the effect on the local economy, or other statements that are not a statement of fact. Forward-looking statements address future events and conditions including, but not limited to, statements with respect to the future development of NorthMet and Mesaba and therefore involve inherent known and unknown risks and uncertainties. Such risks and uncertainties include, but are not limited to, among other things, risks relating to the parties meeting their conditions precedent, receipt of regulatory approvals, timing of closing and the outcome of the development of the NorthMet and Mesaba projects. Actual results may differ materially from those in the forward-looking statements due to risks facing PolyMet or due to actual facts differing from the assumptions underlying its predictions.

PolyMet’s forward-looking statements are based on the beliefs, expectations and opinions of management on the date the statements are made, and PolyMet does not assume any obligation to update forward-looking statements if circumstances or management’s beliefs, expectations and opinions should change.
Specific reference is made to risk factors and other considerations underlying forward-looking statements discussed in PolyMet’s most recent Annual Report on Form 40-F for the fiscal year ended December 31, 2021, and in our other filings with Canadian securities authorities and the U.S. Securities and Exchange Commission.
The Annual Report on Form 40-F also contains the company’s mineral resource and other data as required under National Instrument 43-101.
No regulatory authority has reviewed or accepted responsibility for the adequacy or accuracy of this release.