“Soaring global demand for clean energy- and electric vehicle-dependent metals such as copper, nickel, and cobalt, and supply chain realities laid bare by recent events in Eastern Europe make us keenly aware of our obligation to produce these critical minerals in Minnesota responsibly and as quickly as possible,” said Jon Cherry, chairman, president and CEO. “We urge our government to embrace safe mining of these critical natural resources to expand clean energy and decarbonization efforts in the U.S.”
PolyMet made considerable progress in 2021 as several significant legal challenges by opponents were resolved or significantly narrowed in scope, Cherry said. He cited as two examples a ruling by the state Supreme Court in early 2021 that restored PolyMet’s dam safety permits and the reactivation of the air permit in December by the Minnesota Pollution Control Agency after it fulfilled the requirements of a Minnesota Court of Appeals ruling.

Progress has continued in 2022 as the Minnesota Court of Appeals in January affirmed nearly all aspects of the company’s water discharge permit for the NorthMet Project. Importantly, the court found that water quality standards of the State of Minnesota and Fond du Lac Band of the Lake Superior Chippewa will not be violated as a result of the NorthMet Project.

The water discharge permit is one of only three permits that remain on hold pending additional process, which is anticipated to be largely addressed this year. These are: 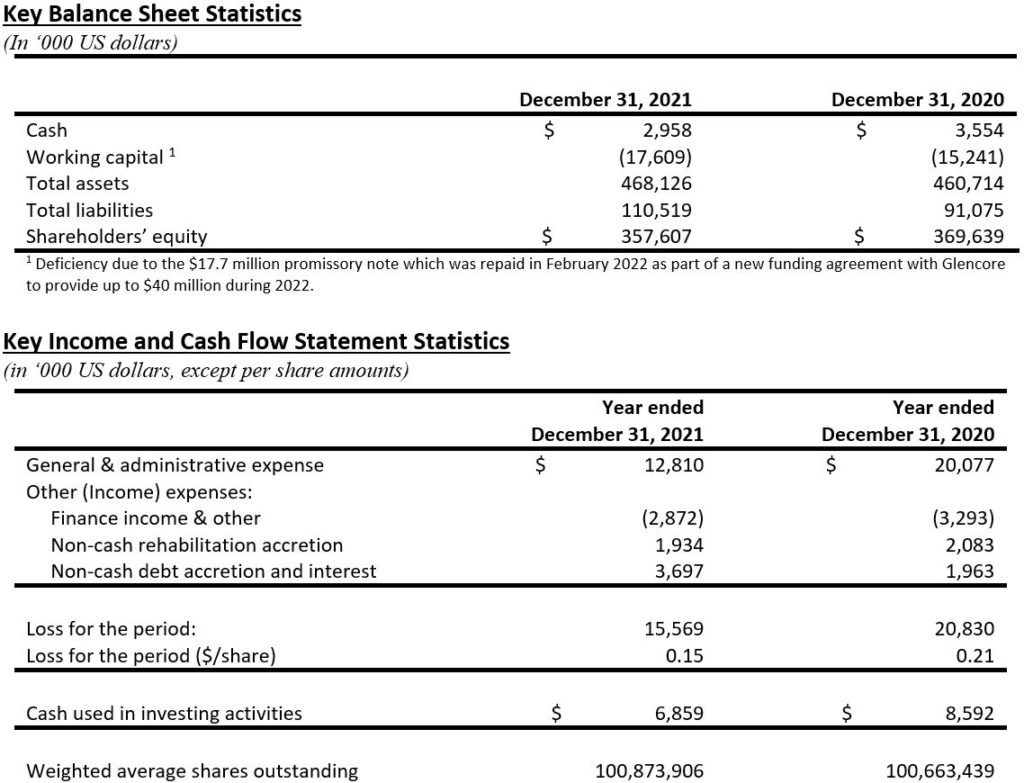 The financial statements have been filed at www.polymetmining.com and on SEDAR and EDGAR and have been prepared in accordance with International Financial Reporting Standards. All amounts are in U.S. dollars. Copies can be obtained free of charge by contacting the company at 444 Cedar Street, Suite 2060, St. Paul, MN 55101, or by e-mail at info@polymetmining.com. Project developments described above are derived from these documents and should be read in conjunction with them.

About PolyMet
PolyMet is a mine development company that owns 100% of the NorthMet Project, the first large-scale project to have received permits within the Duluth Complex in northeastern Minnesota, one of the world’s major, undeveloped mining regions. NorthMet has significant proven and probable reserves of copper, nickel and palladium – metals vital to infrastructure improvements and global carbon reduction efforts – in addition to marketable reserves of cobalt, platinum and gold. When operational, NorthMet will become one of the leading producers of nickel, palladium and cobalt in the U.S., providing a much needed, responsibly mined source of these critical and essential metals.

Located in the Mesabi Iron Range, the project will provide economic diversity while leveraging the region’s established supplier network and skilled workforce and generate a level of activity that will have a significant effect in the local economy. For more information: www.polymetmining.com.

Specific reference is made to risk factors and other considerations underlying forward-looking statements discussed in PolyMet’s most recent Annual Report on Form 40-F for the fiscal year ended December 31, 2021, and in our other filings with Canadian securities authorities and the U.S. Securities and Exchange Commission.

No regulatory authority has reviewed or accepted responsibility for the adequacy or accuracy of this release.

Back to Events and News
©Copyright 2023
Close