St. Paul, Minn., July 20, 2017 – PolyMet Mining Corp. (“PolyMet” or the “Company”) TSX: POM; NYSE MKT: PLM – is pleased to report 67.28% of the eligible shares were represented at its Annual General Meeting of Shareholders held on July 19, 2017 in Toronto, Ontario, and all motions put forward by the Company were passed at the meeting. 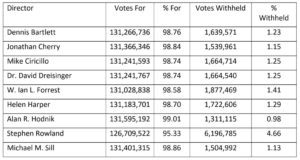 Mr. Bartlett is executive director and a founding partner in Cupric Canyon Capital, a private company that is developing a large copper mine in Botswana. His mining career spans more than 40 years, where he began as a mining engineer for Phelps Dodge Mining Company in 1977. He served in various planning, operations, construction, start-up and leadership capacities at large copper mining operations in Chile, Peru, New Mexico and Arizona, eventually leading all of the company’s North and South American mining operations as senior vice president, mining operations. He later served as senior vice president, development, for Phelps Dodge and, subsequently, Freeport-McMoRan Mining Company. He had instrumental leadership roles in the expansion of the Cerro Verde copper mine in Peru, construction of a new copper mine in Safford, Arizona, and initial development of the Tenke Fungarume copper mine in Africa. Mr. Bartlett holds a bachelor’s degree in mining engineering from the University of Arizona and a Master of Business Administration from Western New Mexico University.

Mr. Ciricillo began his career at INCO Ltd in Ontario Canada, later joining Phelps Dodge Mining Company, which was subsequently acquired by Freeport-McMoRan, where he served in various operations positions of increasing responsibility in the U.S., Chile, The Netherlands and Democratic Republic of Congo. He served as director of project development (Africa), general manager of Miami Operations (Arizona), and president of Freeport McMoRan Africa before joining Glencore in 2014 as head of copper operations in Peru. He is currently responsible for Glencore’s copper smelting and refining operations. Mr. Ciricillo holds a bachelor of engineering degree from McGill University (Quebec, Canada) and an MBA from Western New Mexico University.

“Dennis and Mike bring a level and depth of mining knowledge and experience to the PolyMet board that is without parallel,” said Jon Cherry, president and CEO. “They have operated and had executive oversight over some of the largest and most successful mining and processing operations in the world. They will be a tremendous asset as we navigate through financing, the final stages of permitting, then construction and operations of the mine.”

In other board action, PricewaterhouseCoopers LLP was re-appointed as auditors of the Company and the board is authorized to fix the remuneration to be paid to the auditors.

Following the meeting, Mr. Cherry gave a presentation on achievements of the past year and goals for the future.  Key achievements include:

Key objectives include completing the land exchange via administrative or Congressional process before the end of 2017; seeing draft permits out for public comment in late summer and continuing into fall with final permit decisions beginning in late 2017 and continuing through early 2018; updating the Definitive Feasibility Study and 43-101 technical report consistent with draft and final permits; advancing engineering on long-lead items to prepare for order placement; and, beginning plant rehabilitation work as allowed by permit.

About PolyMet
PolyMet Mining Corp. (www.polymetmining.com) is a publicly-traded mine development company that owns 100 percent of Poly Met Mining, Inc., a Minnesota corporation that controls 100 percent of the NorthMet copper-nickel-precious metals ore body through a long-term lease and owns 100 percent of the Erie Plant, a large processing facility located approximately six miles from the ore body in the established mining district of the Mesabi Iron Range in northeastern Minnesota.  Poly Met Mining, Inc. has completed its Definitive Feasibility Study.  The NorthMet Final EIS was published in November 2015, preparing the way for decisions on permit applications.  NorthMet is expected to require approximately two million hours of construction labor, creating approximately 360 long-term jobs, a level of activity that will have a significant multiplier effect in the local economy.

Specific reference is made to PolyMet’s most recent Annual Information Form for the fiscal year ended January 31, 2017 and in other filings with Canadian securities authorities and the U.S. Securities and Exchange Commission, including the Company’s Form 6-K providing information with respect to operations for the three months ended April 30, 2017,  for a discussion of some of the risk factors and other considerations underlying forward-looking statements.  The Annual Information Form contains the Company’s mineral resource and other data as required under National Instrument 43-101.