St. Paul, Minn., July 14, 2016 – PolyMet Mining Corp. (“PolyMet” or the “Company”) TSX: POM; NYSE MKT: PLM – is pleased to report 68.05% of the eligible shares were represented at its Annual General Meeting of Shareholders (the “Meeting”) held on July 13, 2016 in Toronto, Ontario and all motions put forward by the Company were passed at the Meeting. 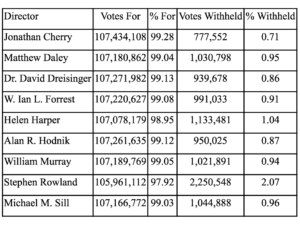 PricewaterhouseCoopers LLP was re-appointed as auditors of the Company and the board is authorized to fix the remuneration to be paid to the auditors.
Following the meeting, President and CEO Jon Cherry gave a presentation on achievements of the past year and goals for the future. Key achievements include:

Key objectives include submittal of the air quality permit and permit to mine applications (summer 2016), USFS Land Exchange Record of Decision, the U.S. Army Corps. of Engineers Record of Decision and 404 wetlands permit, and decisions on state permits following regulatory review and public input.

Other objectives include refinancing and restructuring of the loans from Glencore and securing construction finance commitments tied to the permit schedule.

About PolyMet
PolyMet Mining Corp. (www.polymetmining.com) is a publicly-traded mine development company that owns 100 percent of Poly Met Mining, Inc., a Minnesota corporation that controls 100 percent of the NorthMet copper-nickel-precious metals ore body through a long-term lease and owns 100 percent of the Erie Plant, a large processing facility located approximately six miles from the ore body in the established mining district of the Mesabi Iron Range in northeastern Minnesota. Poly Met Mining, Inc. has completed its Definitive Feasibility Study. The NorthMet Final EIS was published in November 2015, preparing the way for decisions on permit applications. NorthMet is expected to require approximately two million hours of construction labor, creating approximately 360 long-term jobs, a level of activity that will have a significant multiplier effect in the local economy.