“Since completion of the state’s adequacy determination on the NorthMet Final Environmental Impact Statement in March, PolyMet is transforming from the extensive environmental review process into completion of permitting, financing, construction and operation of the Project,” stated PolyMet president and CEO Jon Cherry.

The DNR laid out the process for the permit to mine, comprising: pre-application consultation; submission of formal applications that will be posted on the project website (http://polymet.mn.gov); formal regulatory review; publication of draft permit with an opportunity for public comment; and issuance of permits.

The pre-application consultation is underway and is intended to ensure permit applications are in order to expedite the review process.  The DNR stated that the timeline for completion will be better defined once it has received the formal applications..

Goals and Objectives for Remainder of Fiscal 2017 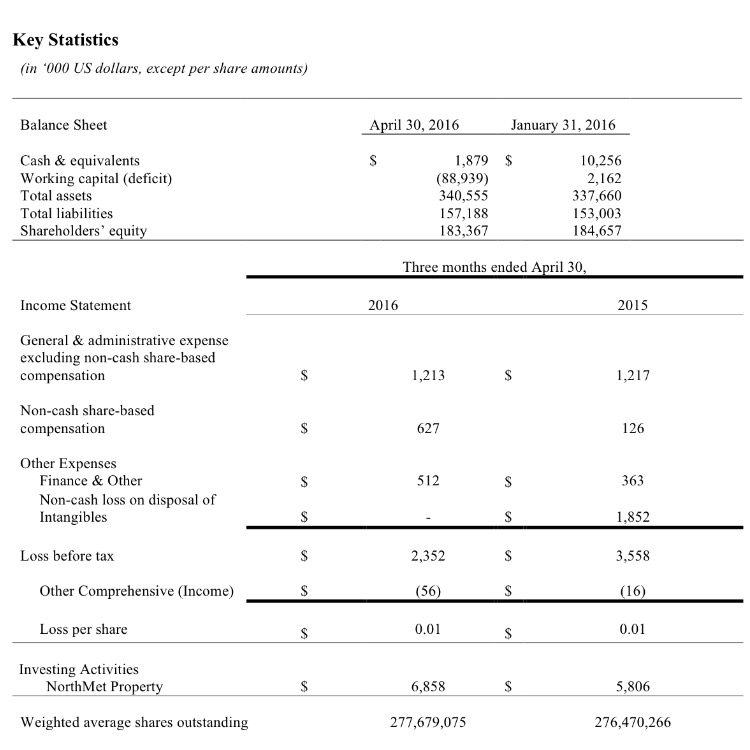 PolyMet Mining Corp. (www.polymetmining.com) is a publicly-traded mine development company that owns 100 percent of Poly Met Mining, Inc., a Minnesota corporation that controls 100 percent of the NorthMet copper-nickel-precious metals ore body through a long-term lease and owns 100 percent of the Erie Plant, a large processing facility located approximately six miles from the ore body in the established mining district of the Mesabi Iron Range in northeastern Minnesota.  Poly Met Mining, Inc. has completed its Definitive Feasibility Study.  The NorthMet Final EIS was published in November 2015, preparing the way for operating permits to construct and operate the mine. NorthMet is expected to require approximately two million hours of construction labor, creating approximately 360 long-term jobs, a level of activity that will have a significant multiplier effect in the local economy.

Specific reference is made to PolyMet’s most recent Annual Report on Form 20-F for the fiscal year ended January 31, 2016 and in our other filings with Canadian securities authorities and the U.S. Securities and Exchange Commission, including our Report on Form 6-K providing information with respect to our operations for the three months ended April 30, 2016, for a discussion of some of the risk factors and other considerations underlying forward-looking statements.