St. Paul, Minn., June 9, 2017 – PolyMet Mining Corp (“PolyMet” or the “Company”) TSX: POM; NYSE MKT: PLM – today reported that it has filed its financial results for the three months ended April 30, 2017. PolyMet controls 100 percent of the development-stage NorthMet copper-nickel-precious metals ore-body and the nearby Erie Plant, located near Hoyt Lakes in the established mining district of the Mesabi Iron Range in northeastern Minnesota.
The financial statements have been filed at www.polymetmining.com and on SEDAR and EDGAR and have been prepared in accordance with International Financial Reporting Standards. All amounts are in U.S. funds. Copies can be obtained free of charge by contacting the Corporate Secretary at First Canadian Place, 100 King Street West, Suite 5700, Toronto, Ontario M5X 1C7 or by e-mail at info@polymetmining.com.

GOALS AND OBJECTIVES FOR THE NEXT TWELVE MONTHS
The environmental review and permitting process is managed by the regulatory agencies and, therefore, timelines are not within PolyMet’s control. Given these circumstances, PolyMet’s objectives include:

“The state continues its careful and thorough review of the permit applications PolyMet has submitted,” said Jon Cherry, president and CEO. “In addition to responding to technical questions from the state and federal agencies about the permit applications, we are focused on conducting pre-construction engineering.”
More detail on the status of permit review can be found at: http://polymet.mn.gov/news.html. 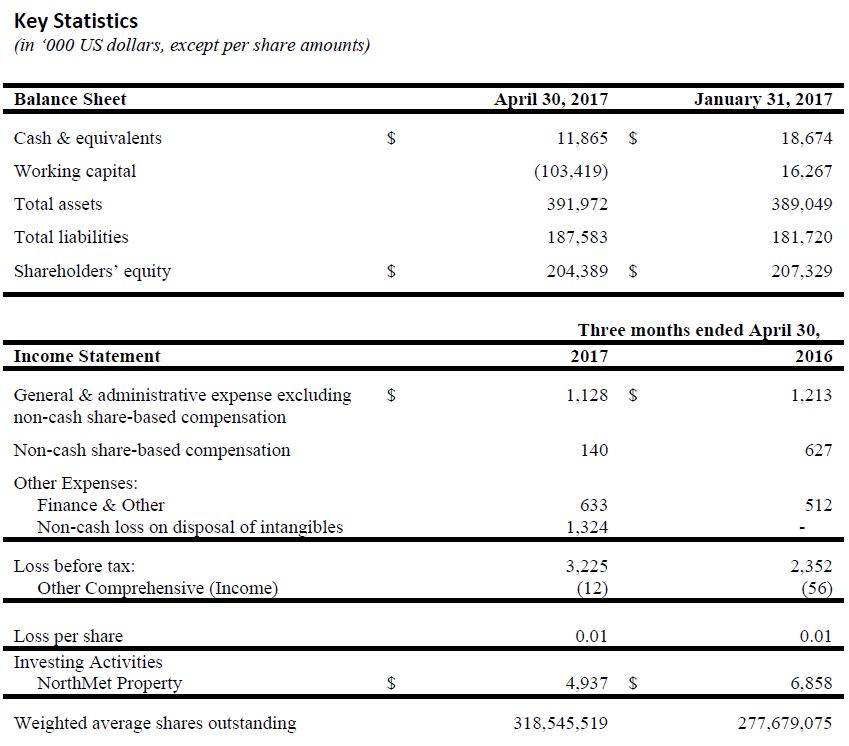 About PolyMet
PolyMet Mining Corp. (www.polymetmining.com) is a publicly traded mine development company that owns 100 percent of Poly Met Mining, Inc., a Minnesota corporation that controls 100 percent of the NorthMet copper-nickel-precious metals ore body through a long-term lease and owns 100 percent of the Erie Plant, a large processing facility located approximately six miles from the ore body in the established mining district of the Mesabi Iron Range in northeastern Minnesota. Poly Met Mining, Inc. has completed its Definitive Feasibility Study. The NorthMet Final EIS was published in November 2015, preparing the way for decisions on permit applications. NorthMet is expected to require approximately two million hours of construction labor, create approximately 360 long-term jobs directly, and generate a level of activity that will have a significant multiplier effect in the local economy.

Specific reference is made to PolyMet’s most recent Annual Information Form for the fiscal year ended January 31, 2017 and in other filings with Canadian securities authorities and the U.S. Securities and Exchange Commission, including the Company’s Form 6-K providing information with respect to operations for the three months ended April 30, 2017, for a discussion of some of the risk factors and other considerations underlying forward-looking statements. The Annual Information Form contains the Company’s mineral resource and other data as required under National Instrument 43-101.