Hoyt Lakes, Minnesota, April 23, 2013 – PolyMet Mining Corp. (TSX: POM; NYSE-MKT:PLM) (PolyMet or the Company) today reported that it has filed its financial results for the year ended January 31, 2013. PolyMet controls 100% of the development-stage NorthMet copper-nickel-precious metals ore-body and the nearby Erie Plant, located near Hoyt Lakes in the established mining district of the Mesabi Iron Range in northeastern Minnesota.The financial statements have been filed at www.polymetmining.com and on SEDAR and EDGAR and have been prepared in accordance with International Financial Reporting Standards(“IFRS”). All amounts are in U.S. funds. 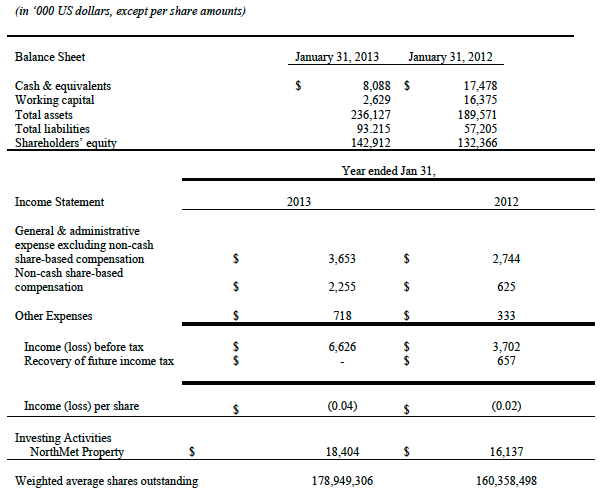 PolyMet Mining Corp. (www.polymetmining.com) is a publicly-traded mine development company that owns 100%of Poly Met Mining, Inc., a Minnesota corporation that controls 100% of the NorthMet copper-nickel-precious metals ore body through a long-term lease and owns 100% of the Erie Plant, a large processing facility located approximately six miles from the ore body in the established mining district of the Mesabi Range in northeastern Minnesota. Poly Met Mining, Inc. has completed its Definitive Feasibility Study and is seeking environmental and operating permits to enable it to commence production. The NorthMet Project is expected to require approximately two million hours of construction labor, creating approximately 360 long-term jobs, a level of activity that will have a significant multiplier effect in the local economy.

Specific reference is made to PolyMet’s most recent Annual Report on Form 20-F for the fiscal year ended January 31, 2013 and in our other filings with Canadian securities authorities and the Securities and Exchange Commission including our Report on Form 6-K providing information with respect to our operations for the year ended January 31, 2013 for a discussion of some of the risk factors and other considerations underlying forward-looking statements.