St. Paul, Minn., April 25, 2014 PolyMet Mining Corp. (PolyMet or the Company) TSX: POM; NYSE MKT: PLM today reported that it has filed its financial results for the year ended January 31, 2014. PolyMet controls 100% of the development-stage NorthMet copper-nickel-precious metals ore-body and the nearby Erie Plant, located near Hoyt Lakes in the established mining district of the Mesabi Iron Range in northeastern Minnesota.

The financial statements have been filed atwww.polymetmining.com and on SEDAR and EDGAR and have been prepared in accordance with International Financial Reporting Standards (“IFRS”). All amounts are in U.S. funds. Copies can be obtained free of charge by contacting the Corporate Secretary at First Canadian Place, 100 King Street West, Suite 5700, Toronto, Ontario M5X 1C7 or by e-mail at info@polymetmining.com.

Earlier today, PolyMet announced the term of the convertible debentures originally issued in 2008 to Glencore AG, a wholly owned subsidiary of Glencore Xstrata plc (“Glencore”), had been extended for one year to September 30, 2015 (previously due September 30, 2014).

Douglas Newby, Chief Financial Officer, commented, “The debentures are convertible at a set price of US$1.2920 per share upon receipt of permits and construction finance. The extension reflects continued support from our largest shareholder and does not impact our anticipated schedule for permits in spring 2015. Following the very good rating from the US EPA on the project Supplement Draft EIS last month, our focus continues to be completion of permitting, securing construction finance, and completing pre-construction engineering and construction planning.” 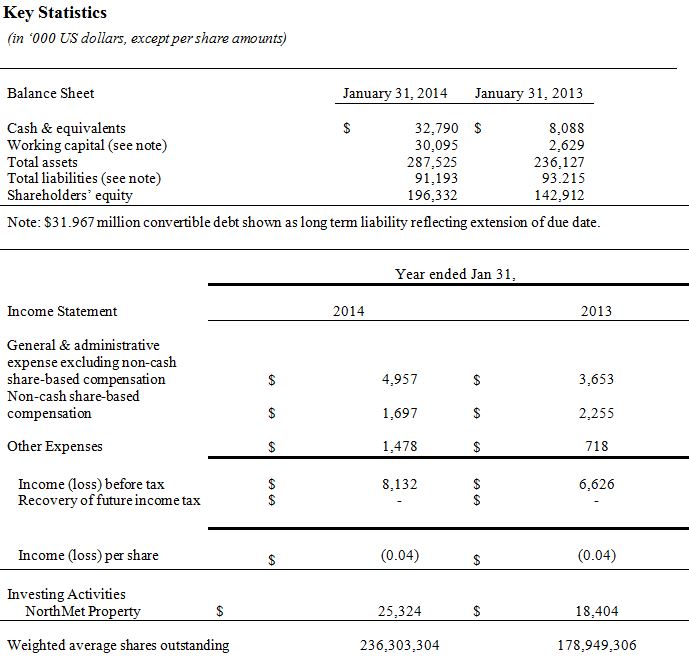 Specific reference is made to PolyMet’s most recent Annual Report on Form 20-F for the fiscal year ended January 31, 2014 and in our other filings with Canadian securities authorities and the U.S. Securities and Exchange Commission for a discussion of some of the risk factors and other considerations underlying forward-looking statements.