St. Paul, Minn., April 21, 2017 – PolyMet Mining Corp (“PolyMet” or the “Company”) TSX: POM; NYSE MKT: PLM – today reported that it has filed its financial results for the year ended January 31, 2017. PolyMet controls 100 percent of the development-stage NorthMet copper-nickel-precious metals ore-body and the nearby Erie Plant, located near Hoyt Lakes in the established mining district of the Mesabi Iron Range in northeastern Minnesota.

“PolyMet has made significant progress during the past year including the state’s adequacy decision for the NorthMet Final Environmental Impact Statement, submission of formal permit applications that are being reviewed by the state, and issuance of the United States Forest Service’s Final Record of Decision on the land exchange.  We also completed a private placement with institutional investors, and we appreciate that Glencore demonstrated its continued support by exercising its right to maintain its pro rata ownership,” said Jon Cherry, president and CEO.  “From our perspective, the permit application review process is proceeding well.”

More detail on the status of permit review can be found at: http://polymet.mn.gov/news.html. 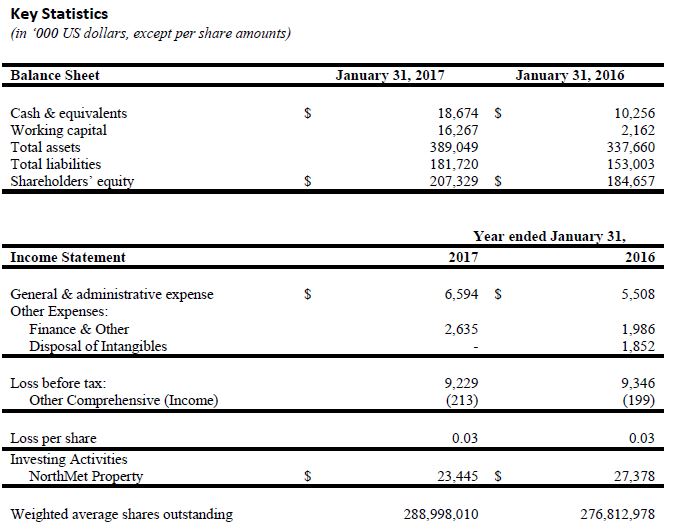 Specific reference is made to PolyMet’s most recent Annual Information Form for the fiscal year ended January 31, 2017 and in our other filings with Canadian securities authorities and the U.S. Securities and Exchange Commission, including the Company’s Form 40-F,  for a discussion of some of the risk factors and other considerations underlying forward-looking statements.  The Annual Information Form contains the Company’s mineral resource and other data as required under National Instrument 43-101.