St. Paul, Minn., December 15, 2014 PolyMet Mining Corp. (PolyMet or the Company) TSX: POM; NYSE MKT: PLM today reported that it has filed its financial results for the three and nine months ended October 31, 2014. PolyMet has executed a confidential, non-binding term sheet for a loan facility of up to US$30 million that it expects to close in early calendar 2015. PolyMet controls 100 percent of the development-stage NorthMet copper-nickel-precious metals ore-body and the nearby Erie Plant, located near Hoyt Lakes in the established mining district of the Mesabi Iron Range in northeastern Minnesota.

PolyMet invested $6.552 million into its NorthMet Project during the three months ended October 31, 2014, compared with $6.315 million in the prior year period. As of October 31, 2014 PolyMet had spent $81.732 million on environmental review and permitting, of which $75.241 million has been spent since the NorthMet Project moved from exploration to development stage. 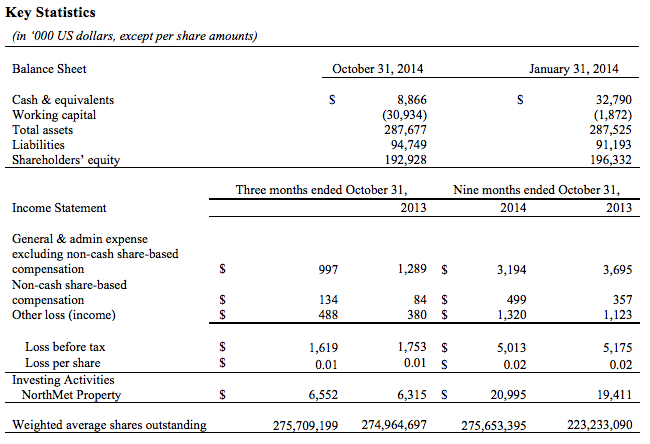 PolyMet made considerable progress in 2014. At the end of the public review period this past March, the supplemental draft Environmental Impact Statement received an EC-2 rating by the U.S. Environmental Protection Agency the highest rating the agency has given to a mine EIS, said PolyMet President and CEO Jon Cherry. Our focus today remains on completion of permitting, construction finance and project implementation.

The co-lead agencies responsible for the final EIS are in their review and analysis of approximately 58,000 comments received on the supplemental draft EIS. The commissioner of the Minnesota Department of Natural Resources has stated that the co-lead agencies expect the final EIS to be completed in spring 2015. Completion of the final EIS, incorporating appropriate responses to public comments, and a subsequent adequacy decision by the MDNR and Record of Decision by the federal agencies are necessary before the land exchange can occur and various permits required to construct and operate the NorthMet Project can be issued. The EIS process and permitting are not controlled by PolyMet, but the Company anticipates permits issued as early as late calendar 2015.

PolyMet plans to complete a Definitive Cost Estimate and Project Update in the next several months, which will incorporate numerous process and project improvements, environmental controls described in the supplemental draft EIS and subsequent changes that will be reflected in the final EIS. The Project Update, to be filed under Canadian National Instrument 43-101, will be based on the project implementation plan and include detailed capital and operating costs reflecting the advance stage of engineering and design. It will also form the basis for securing construction finance so that construction can start promptly upon receipt of key permits.

Joe Scipioni has transitioned from chief operating officer to a consulting role for PolyMet under a multi-year agreement in which he will continue to advise the company. Mr. Scipioni joined PolyMet in July 2006 and has served in different capacities including as president and CEO from 2008 until July 2012.

We thank Joe for his many contributions, Cherry said. His experience and involvement on the Iron Range have been invaluable and we look forward to his continued advice and assistance as the project advances through completion of permitting, financing and implementation. Mr. Scipionis day-to-day responsibilities have been assumed by the management team.

Back to Events and News
©Copyright 2021
Close