GOALS AND OBJECTIVES FOR THE NEXT 12 MONTHS

The environmental review and permitting process is managed by the regulatory agencies and, therefore, timelines are not within PolyMet’s control. Given these circumstances, PolyMet’s objectives include: 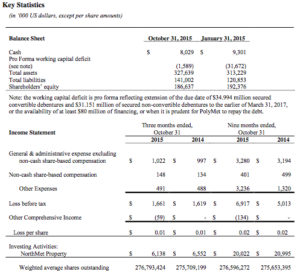 Glencore plc is one of the worlds largest global diversified natural resource companies. As a leading integrated producer and marketer of commodities with a well-balanced portfolio of diverse industrial assets, we are strongly

positioned to capture value at every stage of the supply chain, from sourcing materials deep underground to delivering products to an international customer base.

Specific reference is made to PolyMet’s most recent Annual Report on Form 20-F for the fiscal year ended January 31, 2015 and in our other filings with Canadian securities authorities and the U.S. Securities and Exchange Commission, including our Report on Form 6-K providing information with respect to our operations for the three and nine months ended October 31, 2015, for a discussion of some of the risk factors and other considerations underlying forward-looking statements.

Including 6,458,001 shares issuable upon exercise of other warrants held by Glencore, but excluding issuance of shares committed to others under existing share compensation agreements, Glencore would hold a total of 118,619,013 common shares representing approximately 37.4% of PolyMet’s partially diluted common shares (again assuming no other shares committed under existing compensation agreements were issued by PolyMet.)

Glencore’s decision to enter into the transactions described in this news release was made for investment purposes. Glencore will continue to review its investment alternatives from time to time and may determine to increase or decrease its equity ownership in PolyMet through the acquisition or sale of additional outstanding common shares or other securities of PolyMet through open market or privately negotiated transactions in accordance with applicable securities laws.

Persons who wish to obtain a copy of the early warning report to be filed by Glencore in connection with this transaction may obtain a copy of such report from www.sedar.com or by contacting Glencore at the telephone number and address listed below.

For enquiries about Glencore, including to request a copy of the related early warning report, please contact: