The financial statements have been filed at www.polymetmining.com and on SEDAR and EDGAR and have been prepared in accordance with International Financial Reporting Standards. All amounts are in U.S. funds. Copies can be obtained free of charge by contacting the Corporate Secretary at First Canadian Place, 100 King Street West, Suite 5700, Toronto, Ontario M5X 1C7 or by email at info@polymetmining.com.

Goals and Objectives for the Next Twelve Months
The permitting process is managed by the regulatory agencies.  Therefore, timelines are not under PolyMet control.  Given these circumstances, PolyMet’s objectives include:

At October 31, 2017, PolyMet had cash of $11.248 million compared with $18.674 million at January 31, 2017.  The company is in discussion with Glencore regarding the convertible and non-convertible senior secured debentures currently due to be repaid upon the earlier of availability of construction finance or March 31, 2018.

As of October 31, 2017, PolyMet had spent $127.134 million on environmental review and permitting, of which $120.683 million has been spent since the NorthMet Project moved from exploration to development stage. 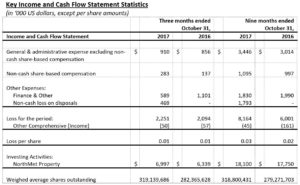 The company’s transition year will consist of an eleven-month period ended on December 31, 2017.  For more details regarding the length and ending dates of the financial periods, including the comparative periods, of the interim and annual financial statements to be filed for the company’s transition year and its new financial year, please refer to the company’s Notice of Change of Year End filed pursuant to National Instrument 51-102 and Management Discussion and Analysis for the three and nine months ended October 31, 2017.  The Notice of Change of Year End is available on SEDAR.  The Management Discussion and Analysis is available on SEDAR and EDGAR and on the company’s website at www.polymetmining.com.

About PolyMet
PolyMet Mining Corp. (www.polymetmining.com) is a publicly traded mine development company that owns 100 percent of Poly Met Mining, Inc., a Minnesota corporation that controls 100 percent of the NorthMet copper-nickel-precious metals ore body through a long-term lease and owns 100 percent of the former LTV Steel Mining Company site, a large processing facility located approximately six miles from the ore body in the established mining district of the Mesabi Iron Range in northeastern Minnesota. Poly Met Mining, Inc. has completed its Definitive Feasibility Study. The NorthMet Final EIS was published in November 2015, preparing the way for decisions on permit applications. NorthMet is expected to require approximately two million hours of construction labor, create approximately 360 long-term jobs directly, and generate a level of activity that will have a significant multiplier effect in the local economy.

Specific reference is made to risk factors and other considerations underlying forward-looking statements discussed in PolyMet’s most recent Annual Report on Form 40-F for the fiscal year ended January 31, 2017, and in our other filings with Canadian securities authorities and the U.S. Securities and Exchange Commission, including our Report on Form 6-K providing information with respect to our operations for the three and nine months ended October 31, 2017.